Recently, I had the unique privilege to listen in on a small panel of war veterans publicly discussing the value of belonging to therapy groups (the participants were all men, but groups for women exist as well). Although there was some crossover, most of the vets reported that they were in groups based on the conflict they had fought in: Gulf, OEF, OIF, Viet Nam. As I listened, it became apparent that the groups are a life raft for those who have given so much for American freedom.

Isolation- When a soldier (all services implied here) returns from deployment, particularly combat, life has changed significantly. For perhaps months or more than a year, service members function in a tiny space with team members they are forced to cope with. They share mundane and traumatic experiences, creating a tight bond. Then, deployment abruptly ends, the soldier gets on a plane, and he is back in his living room with family members who may not necessarily be prepared to understand the warrior. “The world I left wasn’t the same world I came back to…Isolation becomes comfortable,” said one group member. “My group is my support system — it’s a godsend.” One Viet Nam vet described the attitude of his buddies after enduring a not-so-warm-welcome-home after the war: “Guys from the Viet Nam era are the first ones to stand up and welcome vets home now.” The therapy group is a safe place to experience the transition back to “civilian” life.

Moral Injury and Forgiveness– War ravages the soul. At times, combat includes unspeakable acts against other human beings, whether as a result of a command or a split-second survival decision. This creates a crisis of one’s worldview, leaving intense, lifelong shame in its wake. Moral injury does not end; it takes a lifetime of work and recovery, for which therapy groups are invaluable. One soldier said, “I needed a place to breathe, to not be so hard on myself. Forgiveness from God isn’t the issue — it’s forgiving yourself that can be tough sometimes. When you’re with people who care about you, you can let those walls down a little.” Service members come home as different people than as they left. Often therapy groups can offer a safe place to release this brokenness.

Trauma– Combat leaves scars on the body, brain, personality, memory. Traumatic experiences occur quickly in the theater of war, and therapy groups may be the first place, years later, to process grief, loss, or to understand current consequences of post-traumatic stress. “In a twinkling of an eye, he’s medevaced out — you don’t have time to mourn.” One Viet Nam vet described this as “emotional constipation.” A soldier does not survive in combat with a “Love Me Tender, Love Me True” mentality, and must push this aside. When he comes home, he lives in a family, perhaps a marriage and children, and must learn to reconnect with the other side of himself rather than the aggressive, adrenaline-dependent side. Therapy groups offer support from others who also have experienced trauma and its lasting effects.

Therapy groups are offered at the Veteran’s Administration (VA) hospital. This is just one focus of therapy groups; other groups in the community focus on various topics. If you have ideas for a group at Pike Creek Psychological Center, please give your therapist this feedback! 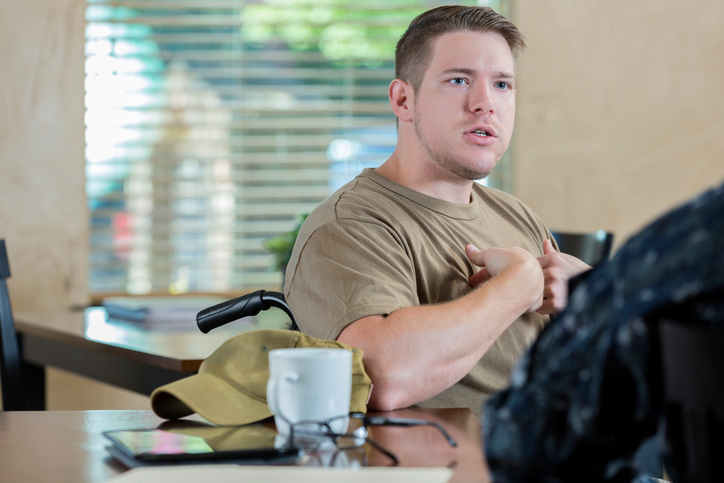