“All You Need is Love”?? Not in Parenting Children, by Anne G. Oliphant, Psy.D.

According to an old Beatles song, “All you need is love, love! Love is all you need.”

Although it is true that attunement, empathy, nurturing, and compassion are essential elements of love necessary for our children to be able to survive and thrive, I believe (with apologies to the Beatles) that love is not enough.

In order for our children to grow spiritually, morally, intellectually, and socially, we need to expand the definition of love. Children need to experience love that is broadly enough defined to include limit setting and the recognition that our children are not the center of the universe, but, instead, are part of a larger group, whether it is family or church or school or the world. Loving parents teach their children that their children cannot have everything they want, every time they want it. They teach their children to share and to care about others, whether nearby or in other parts of the world.

Love in this broader definition, means that children learn that they have to work, and often work hard, for the things they want. “All you need is love,” narrowly defined, just does not cut it in raising children. But love defined as incorporating the broader components listed above, allows parents to teach their children how to become good, moral, compassionate adults, who have meaningful and purposeful lives.

A few weeks ago, I saw an advertisement on TV that shocked me. Someone in the ad agency must have thought it was funny, but I was horrified. In the ad, as the tyrant-child sat in a chair, his father brought him pizza from a local pizzaria. Dad was wearing a hat with “#1 Dad” appliqued on the front. When Dad did not arrive with brand of pizza the child had demanded, the child ripped the #1 from his Dad’s hat and sent his father off to get the “correct” pizza—the pizza that the child had ordered his dad to bring him originally.

What’s wrong with this picture (in addition to the child’s blatant disrespect for his father and the child’s selfishness)? First, the parental hierarchy is disrupted. The little “king” child demands that his father bring him exactly what he wants, when he wants it, and then goes further by humiliating his father for failing to bring exactly what the child had demanded. And, second, just as appalling, the father leaves, downtrodden, trying to appease the child’s inappropriate demands.

We have all heard stories about parents who give their children too many toys, too many trips to Disneyworld, too many unearned trips out to dinner and ice cream, while having far too few expectations for their children’s appropriate behaviors. Yes, children must be given consistent “labeled praises” for good, socially appropriate behaviors, in order to help ensure that the positive behaviors will be repeated by the child. However, as the child psychologist Dr. Eileen Kennedy-Moore reminds us, “false praise” — unrelated to the child’s efforts and to the meaningfulness of what the child is trying to accomplish– does not build a healthy sense of self-esteem.

Instead, healthy self-esteem comes from the child’s internal satisfaction in completing age-appropriate tasks by himself or herself. Keep in mind that this does not mean that parents abandon their child in the child’s struggle to learn a new skill or pro-social behaviors, or that parents demand of children behaviors or tasks that the child is not developmentally ready to perform.

Parents need to set up situations so that their child can learn in positive ways; for example, parents can coach their child in informative (but not demanding ways). And parents must remember to utilize “labeled praises,” in which the parents point out specifically what the child did that was positive, such as, “I like the way you shared your toy with your brother; that was kind.” False praise, on the other hand, does not help anyone, especially children.

Sadly, some experts tell us that selfishness and narcissism are rising in the dominant North American culture. Behaviors like those shown in the television pizza advertisement, remind us about what we need to change in our parenting if we are to raise good, moral, competent, and compassionate children. Instead of capitulating to his child’s outrageous demands, the Pizza Dad could have said to his child (in a pleasant, but firm voice), “This is the pizza I have purchased and this is what is being served.” 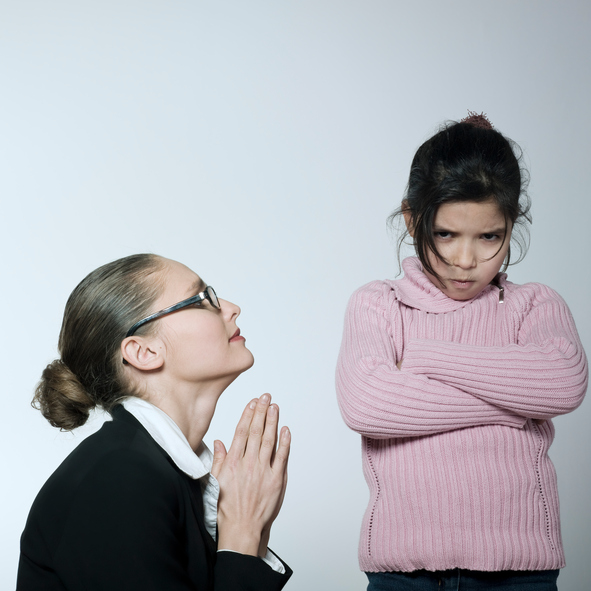